In the first of two Pioneers in Science installments at the World Science Festival, NASA chief scientist Ellen Stofan answered questions from high school students from across NYC—as well as from kids in Denmark, Spain, and the Czech Republic, who joined the discussion via a Google Hangout.

One student asked about the potential for terraforming Mars into a more habitable world; Stofan said that while it might be possible to generate an atmosphere on Mars over millions of years, the Red Planet’s lack of a protective magnetic field would still leave residents vulnerable to the intense radiation borne by the solar wind. 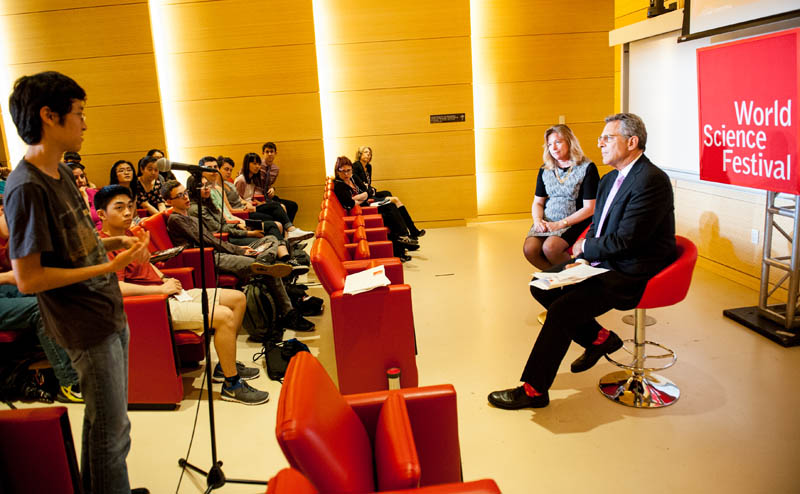 A number of questions centered on alien life—what it might look like, what sorts of environments it could be found in, and how scientists might be able to find it. One thing researchers are looking for on other worlds, Stofan said, is some kind of disequilibria, some sign that the expected chemical makeup of the world is skewed somehow, potentially by biological processes that consume resources or give off byproducts.

Overall, Stofan stressed that all the interested students should pursue scientific careers, so that humanity has a full cadre of thinkers working on the vast questions facing us in the future.

On the Power of Science and Storytelling: Following Curiosity, Illuminating the Truth 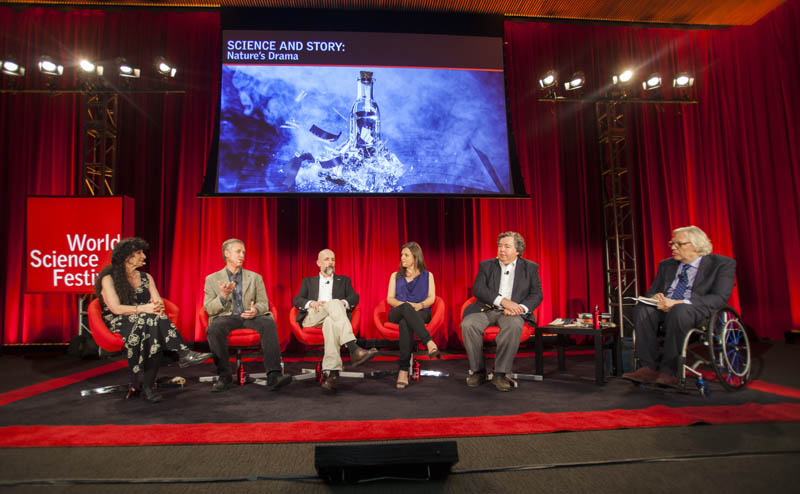 Are you one of those people at the Strand, over in the back? That’s the way moderator John Hockenberry welcomed the audience of science readers at the start of Thursday night’s Science and Story: Nature’s Dramas. And those science readers were in the right place, with five top science writers on hand to discuss their work and share their thoughts on the pleasures and responsibilities of their field.

Rebecca Skloot and Diane Ackerman both spoke of their eagerness to “follow your curiosity.” When Skloot learned that a poor black woman’s cancer cells had been taken without her knowledge and, unbeknownst to her surviving family, went on to become a valuable commodity in medical research, she spent over a decade researching and writing what would become The Immortal Life of Henrietta Lacks. Ackerman, whose latest book The Human Age: The World Shaped By Us deals with our changing relationship with nature, tackles the serious issue of climate control, but is also glad to be able to “wake up one morning and say, I wonder why snails use love darts, and run with it.”

Dan Fagin, whose book Toms River: A Story of Science and Salvation won the Pulitzer Prize, sees his story as hopeful, despite it being about toxic waste and cancer clusters in a community, because it shows how science can “illuminate the truth,” or at least bring us closer to it.

For David Quammen, author of The Chimp and the River, one of his main principles is to “go there.” Quammen went to Africa to trace the path of two HIV positive specimens from 1959 and 1960 that resurfaced decades later, and helped put to rest the idea of Patient Zero who had somehow launched the AIDS epidemic. Those specimens enabled scientists to conclude that AIDS had been in the human population as early as 1908.

The only fiction writer onstage was Neal Stephenson, whose new book Seveneves deals with the moon breaking up into seven pieces. Stephenson, who studied physics in college, goes into great detail of the scientific implications of how a moon breakup could be cataclysmic to life on Earth. But when pressed by Hockenberry as to whether he was dissatisfied with the fact that Earth was not interesting enough so he had to make up his own calamities, Stephenson said that it was typically real-life scientific events and personalities that gave him the inspiration to write his fiction. 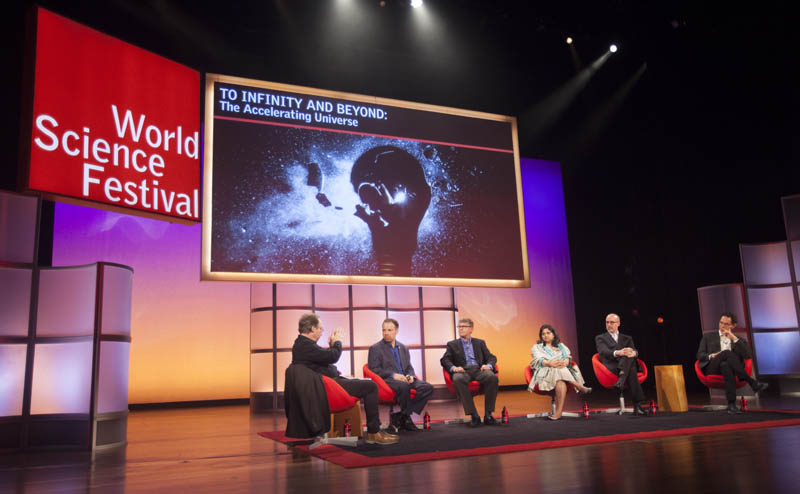 At To Infinity and Beyond: The Accelerating Universe, a stellar panel of physicists dived into the observations and theories that shape our understanding of the geometry and expansion of the cosmos.

Nobel Prize-winning researcher Adam Riess talked about his work examining the light from distant supernovae to clock the pace of distant regions of space.

Famed physicist Priyamvada Natarajan explained how dark matter-stuffed galaxy clusters create “potholes in space-time” that aid the search for dark energy, that mysterious stuff that makes up more than two-thirds of the universe.

Theorist Neil Turok raised an important and chilling question: If dark energy-driven expansion creates a horizon beyond which we can never possibly see, how can we ever hope to create a grand unified theory of everything? (Watch the Full Program Here.) 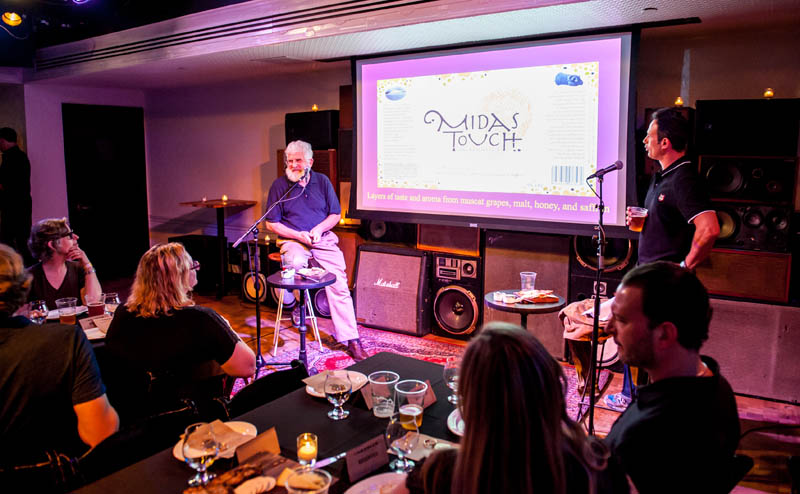 Dogfish Head president and founder Sam Calagione made it clear to the crowd at the Cheers to Science: Something Old, Something Brewed program that he is not a fan of the Reinheitsgebot, the 16th century “Bavarian Purity Law” that mandated beer be made of just three ingredients: hops, barley, and water. Too limiting, too simple, too anti-historical. Why not draw instead from the rich history of fermented beverage-making that stretches back over the thousands of years before the 1500s? Like Tej, from Africa, a more complex meady mix. Calagione explained that over a decade ago he set out to recreate ancient brews made from the native ingredients different cultures around the world tapped for their concoctions, ingredients such as chili peppers, corn, and saffron. And it was with saffron that Calagione and molecular archaeologist Pat McGovern began their tasting tour of interpretive beer-making and the science they harness to make it happen.

Starting in ancient Turkey, they introduced the thirsty crowd to Midas Touch, the first beverage that Calagione and McGovern recreated together by blending archeological finds and chemical analyses with creative recipe-making.

Weaving their own blend of Hope and Crosby into their talk, with McGovern playing straight man to Calagione’s wisecracking Hope, Calagione explained how alcoholic beverages were often used in religious ceremonies from early on because of the feeling of “being closer to the gods.” McGovern described how his scientific team analyzed yellowish residues found in 2,700-year-old vessels used in a funeral ceremony for a king—possibly King Midas, who actually existed, McGovern noted. The highly unusual mixture of tartaric acid (the principal organic acid in grapes), beeswax (the marker for mead), and barley beer (the marker for beer) discovered through the analysis suggests the vessels had contained a grog, and it was grog that became the inspiration for Midas Touch.

Traveling back further in time to ancient China, the birthplace of alcoholic beverages, Calagione and McGovern told the story of Chateau Jiahu, their rice-based drink made of orange blossom honey, muscat grape juice, hawthorn fruit, and barley malt that they styled from a fermented rice-based beverage made some 9,000 years ago.

Next up was their Kvasir, a Scandinavian-influenced sour beverage modeled on the chemical and botanical evidence discovered in a 3,500-year-old birch-bark drinking vessel from the tomb of a woman whose body was so well kept that part of her brain tissue was still preserved.

The duo ended the evening with an agave-based beverage crafted from findings in Mexican drinking vessels that predate the Europeans’ arrival. This recreated pulque, likely to be called “Two Rabbit” after the Aztec god Ometochtli, made its premiere at the festival. When Sam asked the audience if they should go ahead with brewing up a batch to sell as an official Dogfish ancient ale, a resounding round of cheers erupted in the room indicating a hearty yes.

The concluding Q&A session included questions from an organic chemist and a South American who was surprised that the pulque was not milky (too conventional, Sam responded) among many others. The evening’s final question came from a woman who asked, simply, what’s next. Sam’s eyes lit up, and he said, you know that band of alcohol in space? “I want to get with that dot com guy,” said Sam, “and make something from that [space alcohol].”