The last day of the 2015 World Science Festival saw entertaining discussions of the purpose of sleep, the nature of time, and the potential ways we might harness quantum mechanics—plus a science takeover of Washington Square Park.

All About That Space

It was hard to walk three feet in any direction at the Ultimate Science Street Fair without running into something fantastic, from the ring of Hubble pictures around the park’s central fountain, to myriad booths where kids could play with magnets, drive rovers through obstacle courses, and walk on water (or, rather, a cornstarch-based quicksand).

The astronaut training simulator, where children got to try on toy space suits donated by Aeromax Toys and get hoisted up to simulate working in zero gravity, was especially popular.

Getting photos in a full-size space suit and being able to learn about the science of space was another hot spot. Kids also flocked to the Biobus, to examine organisms under microscopes.

A special scavenger hunt that led kids throughout a learning tour of the Street Fair was a favorite of Matthew, a 9-year-old New Yorker: “I have learned that the animal with the biggest brain is the sperm whale, and there are 3,700 satellites orbiting earth right now, and that the sunset on Mars is blue.”

Kids getting an idea of zero gravity at the #astronaut training simulator. #WSF15 A video posted by World Science Festival (@worldscifest) on Jun 2, 2015 at 10:06am PDT 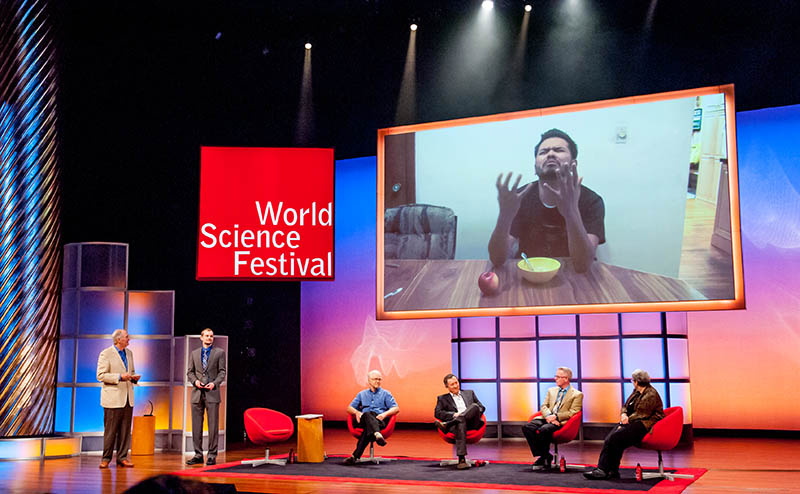 At What is Sleep?, a program made jointly with Alan Alda’s Flame Challenge, kids and adults learned about the importance of sleep—not only as something that helps us recover from fatigue, but something that also aids in learning and memory. During sleep, “we think the brain is producing a better image of the way the world works,” neuroscientist Robert Stickgold said.

The program also announced the winners of the 2015 Flame Challenge, in which scientists competed (in written or video form) to provide the explanation of the question “What is sleep?” that satisfied the ultimate panel of judges—20,000 11-year-olds. Brandon Aldinger won for his written entry, which explained in part that:

Although there’s still some mystery as to exactly why we sleep, we know that our body takes care of two big things while we’re sleeping. First, our brain organizes what it learned while we were awake. Your brain is made up of billions of cells called neurons. These neurons are connected in a huge network. While we sleep, our brain strengthens and rearranges these connections to help us remember things more quickly and easily when we are awake. So, the next time your mom or dad yells, ‘Wake up! It’s time to go to school!’ you can explain to them that you were actually still studying from yesterday!

Eric Galicia took the other top prize, for his video below:

Time Is of the Essence 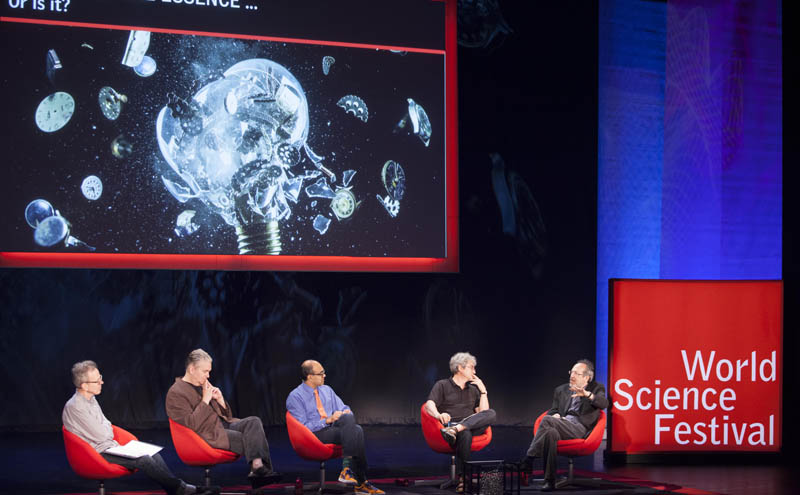 In Time Is of the Essence … or Is It? a panel of physicists explored the meaning of time, answering such questions as, is time real or just a concept? Is it emergent? Fundamental? A thing? Moderator Jim Holt framed the discussion by reviewing the evolution of the concept of time through the centuries. For Plato, genuine reality is timeless. For Aristotle, time is quite real, but it depends on motion and change. For St. Augustine, time is just in the mind. For Newton, time is real, and flows without relation to anything external. Then Einstein came along and announced there was no cosmic grandfather clock or universal now, and he merged time and space into the single fabric of space-time. But with quantum theory, Holt said, Einstein’s revolution is unfinished. And off they went.

The first two scientists to speak, it turns out (though you’d never have known it until Holt pointed it out later), are diametrically opposed to each other on the essence of time.

Theoretical physicist Lee Smolin, the panel’s biggest believer in the reality of time, wondered rhetorically, if you start with a world where there’s no fundamental time, there’s just change and events, can we really reconstruct the world? He used to agree with Einstein’s point of view, he said, but when he pondered how nature came to choose the laws of physics, he concluded “there would have to be dynamics under which the laws themselves evolved and change in time.” If time were emergent, it would be emerging “from timeless laws and there would be no way they could evolve.”

Theoretical physicist Carlo Rovelli, the panel’s biggest disbeliever in the reality of time, made the distinction that time is real but not fundamental. The best conceptualization we have, he said, is to “just think of the way things change with respect to one another.” (As for his disagreement with Smolin, both men were quick to point out that they are good friends. And Rovelli pointed to the benefits of their cordial opposition: “Science often works by different ideas, not by consensus.”)

Physicist Vijay Balasubramanian pointed out that there was something implicit in Rovelli and Smolin’s disagreement. Einstein said that space and time are physical entities, actual things (before that, they were stages, fiction, not a thing), and with physical things, you need to look at their dynamics, how they move and change, and then you need to look at small versus large things because quantum mechanics informs us that very small things don’t stay put—they fluctuate. If you accept these premises, Balasubramanian said, then the question becomes, can you build a theory of space and time using quantum mechanical rules? It’s an exceedingly challenging problem, and two ways physicists are trying to figure this out are through studying the very early universe and black holes.

Time ends inside a black hole. “That’s strange,” Balasubramanian said, “What does that mean? I’d like to solve that. You also lose information, something that goes against physics.”

Physicist and philosopher David Albert noted that Newton’s decision to make time a parameter was the “founding and characteristic gesture of modern physics” since it enabled physics to become quantitative.

There was also talk about how time affects our everyday lives. Rovelli made the point that if a brother lived at the seashore while his twin lived in the mountains, over a lifetime the one at sea level would be younger, though only by about a tenth of a second. This understanding is critical to our GPS network. Since GPS satellites are high above the ground, Rovelli explained, GPS technology won’t work unless infinitesimal time differences are taken into account.

Holt ended the discussion by quoting the composer Hector Berlioz: “Time is the greatest of teachers, but unfortunately it kills all its pupils.” (Watch full video here.) 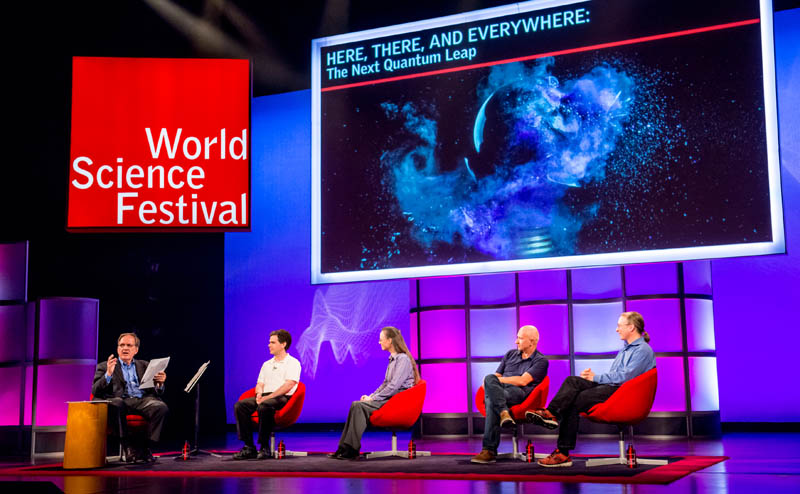 And at Here, There, and Everywhere: The Next Quantum Leap, journalist Bill Blakemore moderated a wide-ranging discussion of the possibilities looming as researchers work to harness quantum mechanics for computing, teleportation, and much more. But there are still a lot of unknowns. While we know that quantum computing can be great for things like cryptography and optimization, there are a host of other applications still waiting to be discovered. But the “funkiness” of quantum reality is still something hard for us macroscopic beings to work with—like the fact that merely observing a quantum system changes how it behaves.

“Quantum computing is the opposite of pornography; we only know it when we don’t see it,” panelist and MIT engineer Seth Lloyd said. 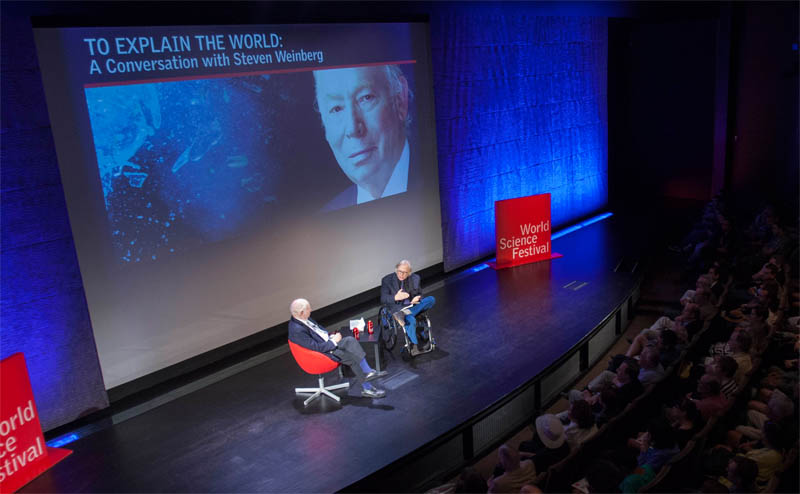 At the final event of the Festival, Steven Weinberg, the Nobel Prize-winning physicist whose many books include To Explain the World, launched his talk by expressing concern over science’s money problems: The golden age in science in the United States may be coming to an end thanks to a reluctance to fund projects such as the Large Hadron Supercollider, which ended up being built in Geneva. It would be “tragic,” Weinberg said, if all we did is go on verifying the Standard Model.

Turning to the Greek classical age, Weinberg criticized the way that science was practiced then; though the era’s sculpture and literature are admirable, its science was lacking because its leading thinkers had no idea that theories must be verified. He compared the period to poetry where you’re not expected to prove such Keatsian formulas as beauty equals truth. Aristotle made some good observational arguments, Weinberg admitted, but did not believe that mathematics played any role in understanding nature, and as a result, his grand theoretical picture was all wrong.

When asked by moderator John Hockenberry to identify the greatest “unlearning” that had to be done in physics over the last 100 years, Weinberg replied that it was to reject the notions that physics and chemistry were separate sciences and that biology had independent laws.

Then it was on to Newton whom Weinberg called “the greatest figure of all” in one breath while commenting in another that he’s “a very strange character, someone I don’t think I would like to have a beer with.” So why such praise for Newton? While his “opinions do not form the basis of modern views,” Newton changed the world by giving us “a model for what a physical theory can be and can do.” And, as historian Hugh Trevor-Roper noted, Weinberg said, “the success of Newton’s theories eventually led to the end of burning witches.”

When it comes to having a beer with a long-gone scientist, Weinberg said, he would prefer to drink with 17th-century Dutch physicist Christiaan Huygens. Before Huygens, Weinberg explained, scientists wrote textbooks as if they were mathematics textbooks, starting with unquestioned postulates, but Huygens stated in an introduction to a book on light that it would be different from a book on geometry because he was starting with postulates of which he was not certain.

After a question-and-answer session with the audience, Hockenberry asked Weinberg what he would choose if he could send a concept or symbol to an alien civilization. Weinberg replied that despite his criticisms of Pythagoras, he would send a picture of a right triangle with notations describing the Pythagorean theorem.