Update 4:00pm EDT, 7/15/2015: Several exciting new pictures of Pluto and two of its moons were just unveiled by the New Horizons team. 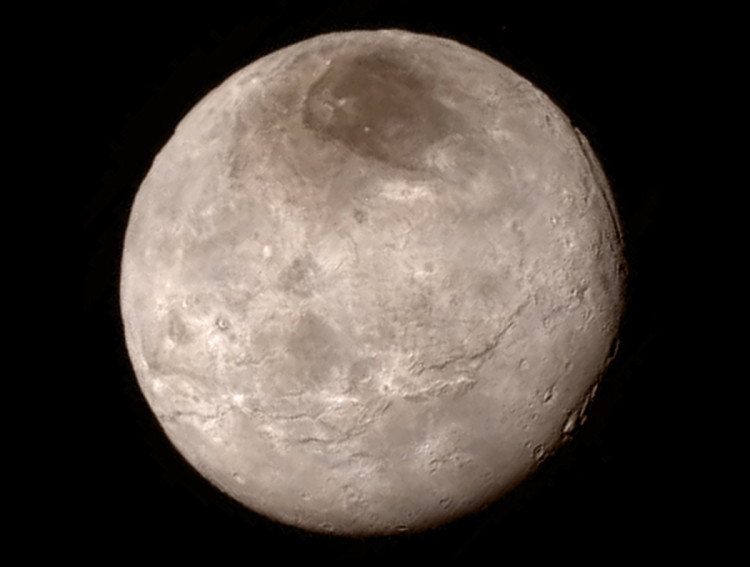 First up, the closest view yet of Pluto’s biggest moon, Charon.

The scientific team was surprised by the relatively smooth surface of the moon—they were expecting many more craters to dot its surface. Charon’s sleek exterior suggests that it has been recently geologically active. The dark region up top (which the crew has informally dubbed “Mordor”) shows several bright spots, suggesting that it is perhaps a region coated with a thin layer of some dark material. And on the upper right-hand side of Charon, that long notch is actually a canyon 4 to 6 miles deep. 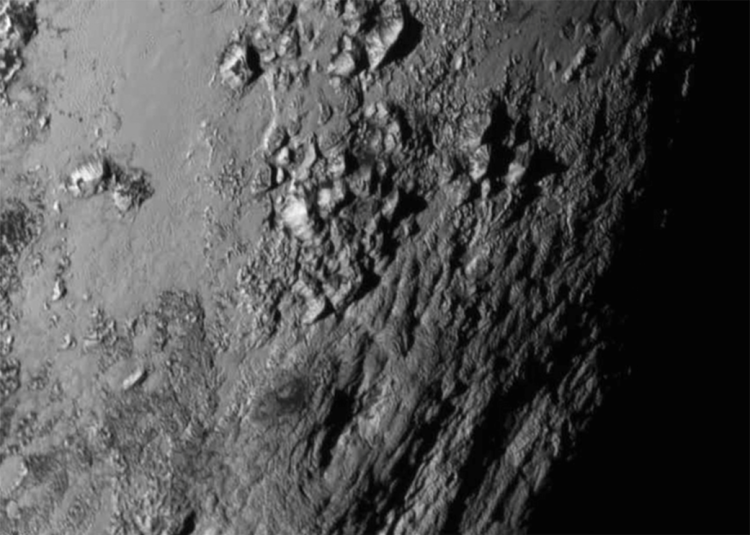 This close-up of Pluto’s surface shows a range of icy mountains that rise up to 11,000 feet high, and a surface much less scarred by meteor impacts than expected. 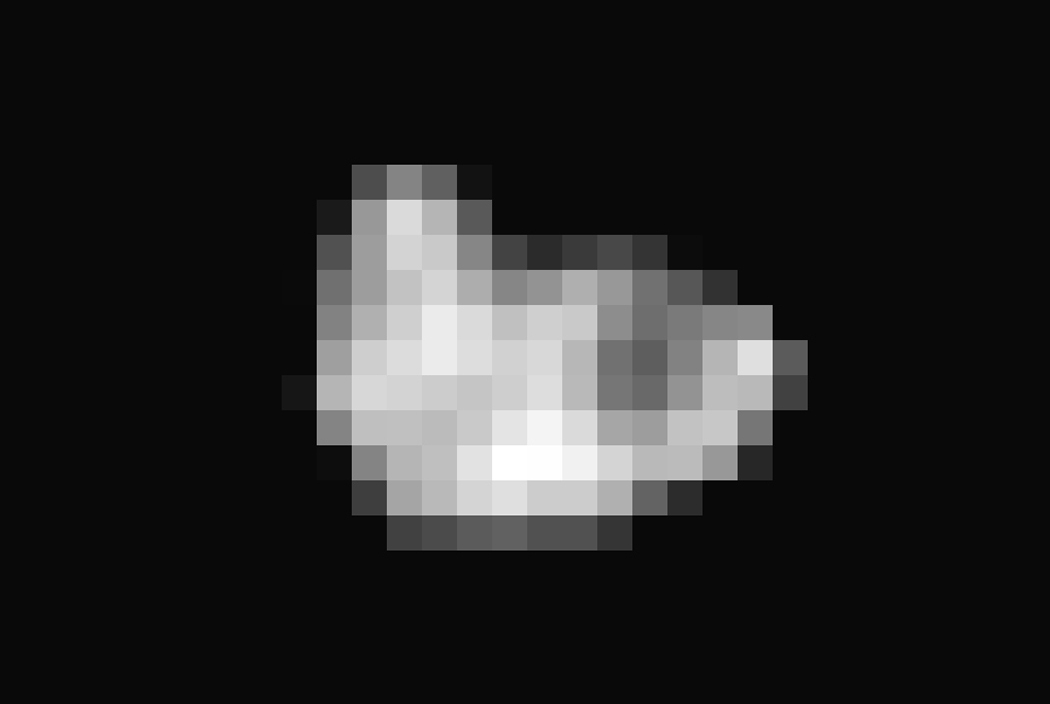 We also got our first glimpse of Pluto’s moon Hydra—enough to discern its general kidney bean shape. The brightness of the image may indicate that a good portion of the tiny moon is made of water ice.

Update 10:20pm EDT, 7/14/2015: New Horizons phoned home tonight to let the NASA team know that everything is ship-shape, then went back to collecting scientific data, team members said at a press briefing. A new stream of data will be sent on Wednesday that includes new pictures of Pluto with 10 times greater resolution than the best ones seen yet, plus more color data of Pluto’s moon Charon, and some of the first bits of spectroscopy data from the dwarf planet. Those pictures and data should be revealed tomorrow at at 3 p.m. EDT.

Just before 8:00 a.m. Eastern Time on July 14, 2015, the New Horizons spacecraft traveling at a clip of ~31,000 miles per hour passed about 7,800 miles above Pluto’s surface, which is roughly the distance between New York City and Mumbai, India. It was a moment nine years and three billion miles in the making—and scientists expect that the grand piano-sized space probe will be sending back enough data to keep scientists happy for a long while afterward. (See New Horizons’ travel route.)

To fulfill its scientific goals, New Horizons has a full scientific arsenal to measure Pluto’s geology, atmosphere, and other characteristics. (See  pictograph below.) 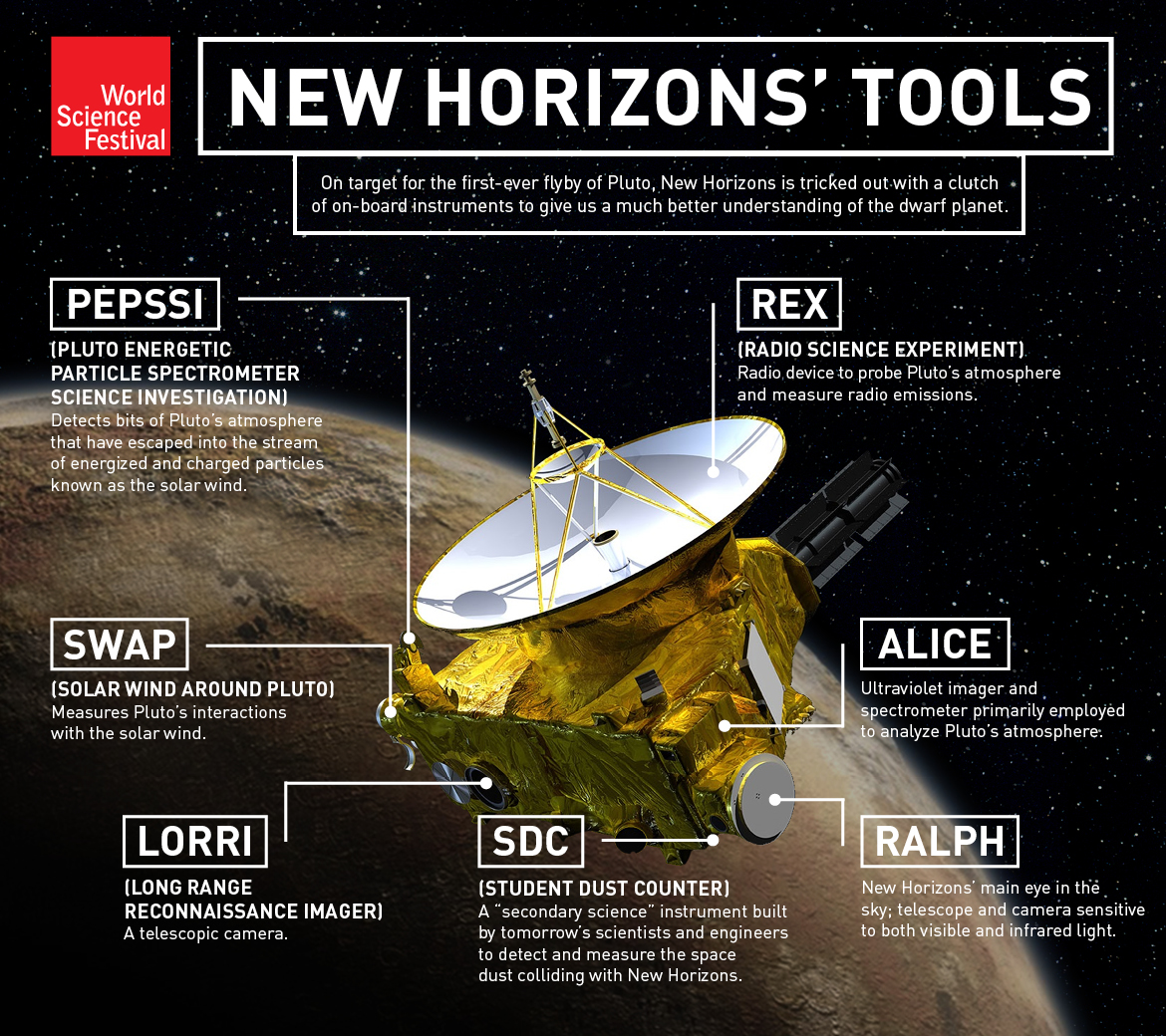 “When we put all of that information together (surface geology, surface composition, atmosphere, interior, irradiation) Pluto will be by far the best-known ‘minor’ icy object in the outer Solar System,” said Noemi Pinilla-Alonso, an astrophysicist at the University of Tennessee, Knoxville, in an interview with ResearchGate.

(The probe has one other important payload on board: a bit of the ashes of Clyde Tombaugh, the astronomer who in 1930 discovered what’s now classified as a dwarf planet.)

What’s Next for New Horizons

So long as it is able to avoid a collision, after the spacecraft zooms past Pluto, New Horizons will continue to head out into the Kuiper Belt, a flat ring extending out beyond the planets that’s mostly composed of little bodies made from frozen water, ammonia, methane, and other volatile elements. NASA scientists have yet to pick a target in the Kuiper Belt for the craft to observe next, but several candidates were identified last year. All are bigger than comets, but just a fraction of Pluto’s size. It’s thought that these icy bodies have never been heated by our sun, and are basically a well-preserved frozen sample of conditions in the early solar system.

While scientists still have to wait with bated breath for the probe to check in again late Tuesday night, New Horizons has already refined our view of Pluto beyond our wildest hopes.

Pluto by Hubble vs. Pluto by New Horizons pic.twitter.com/0en0NAaA74 (via @imbadatlife)