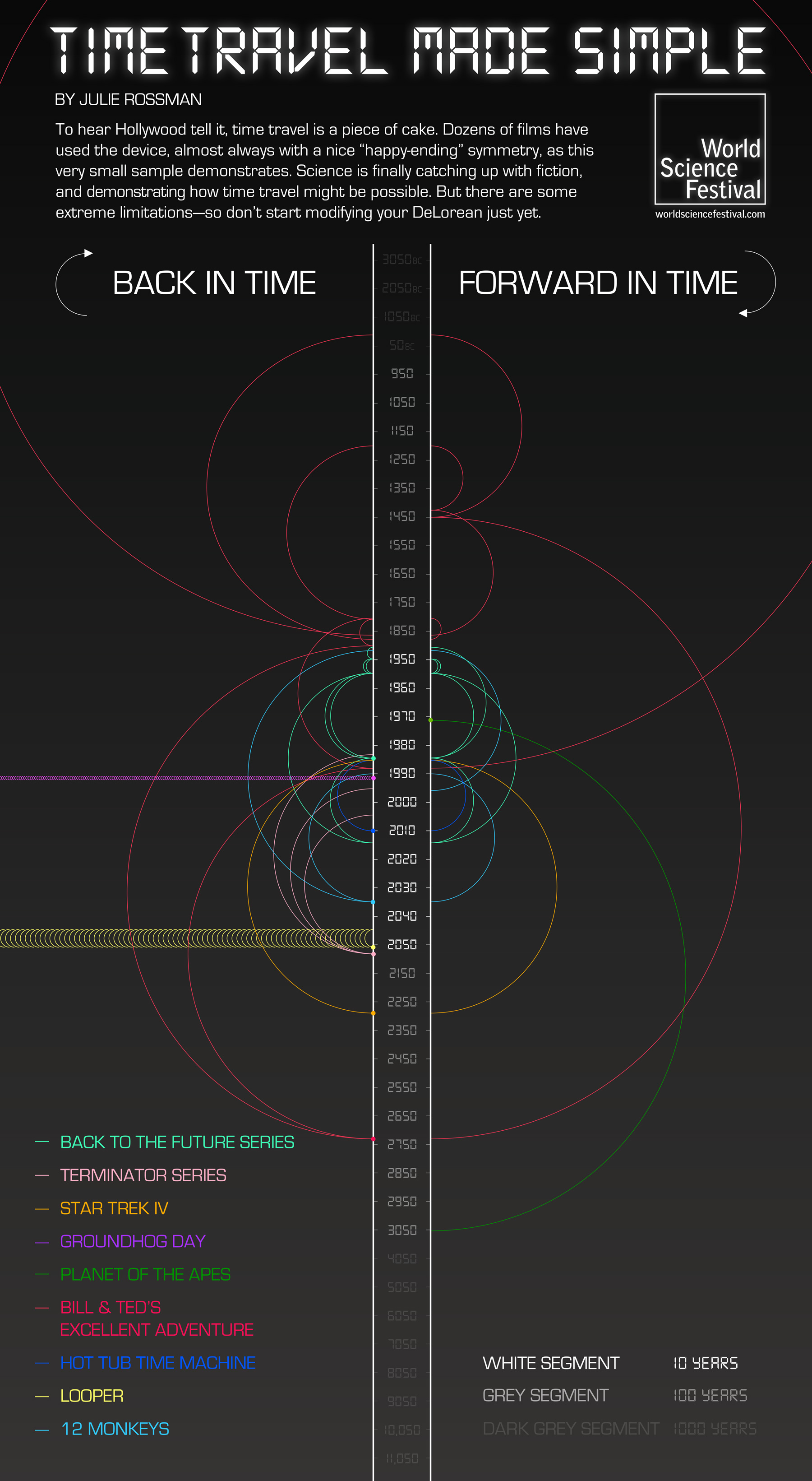 In movies, time travel methods are mostly explained along the lines of “something something plutonium something wormhole.” But physicists do have some idea of methods that might allow for actual time travel—though they might not necessarily prevent you from killing your own grandfather.

One trope in time travel science fiction is slightly plausible, if physically impossible—traveling faster than the speed of light. The crew of the U.S.S. Enterprise did this in Star Trek IV: The Voyage Home, by using the sun’s gravitational pull to accelerate their spaceship to super-light speed. If it were possible to travel faster than light (Einstein calculated it would take an infinite amount of power), it is theoretically possible for signals to be sent back in time; it’s questionable if the same method could work with people.

What about going forward in time by going really fast? Any roundtrip travel of any length will send you a little bit further into the future than your chronological aging would imply, since time dilation occurs at any speed (in fact, an astronaut on a six-month mission aboard the International Space Station will have aged .007 seconds less than everyone on earth, even with time dilation from gravitation working to counter the effect by slightly speeding up time). With a very fast ship, moving closer to the unattainable speed of light, you could increase this difference: Spend a few decades traveling, and you might arrive at your destination to find that centuries have passed since you left.

In 2011, faster-than-light travel appeared closer to reality than ever (for particles, anyway); CERN scientists thought they’d found subatomic particles traveling faster than the speed of light. But the measurement was later found to be an error, possibly due to a faulty connection between a GPS unit and a computer.

Wormholes are another conceivable route for traveling backwards and forwards through time. In the 1960s, New Zealand mathematician Roy Kerr calculated under the right conditions, a spinning star can collapse not into a point, but into a ring; if something passed through this ring, it might travel through a tunnel in spacetime called an Einstein-Rosen bridge, or wormhole. The two ends of the wormhole might connect to different universes, or to different points in the same universe (separated by time as well as space). Scientists have yet to actually find evidence for wormholes, but they do square with Einstein’s theory of gravity. Caltech physicist Kip Thorne took the theory of wormholes to another level later, showing that if you can move the openings around, the entrances and exits can exist at different moments in time.

Frank Tipler, an astronomer, came up with another possible method of time travel that might work for actual space travelers, though building it is a bit of a tall order: First, you need a chunk of matter 10 times the mass of the sun. Then you roll it up into a cylinder, and set it spinning to a few billion rotations per minute. Stuff that travels in a precise spiral around the cylinder could end up on a closed timelike curve, a weird twist of spacetime that sends you on a loop back to the time where you entered it. But constructing one of these Tipler cylinders is going to take some time, as it has to be of infinite length.

Assuming you make it back to the past, what happens if you kill an ancestor of yours? Do you cease to exist? Does you ceasing to exist then mean you don’t go back in time in the first place to kill your grandfather? Russian physicist Igor Novikov developed a theory called the Self-Consistency Principle, under which the odds of any action that you might take creating a time paradox are zero.

So  it’s impossible to change the past because you’ve already been there in the past, taking actions that resulted in your future-present. Not all physicists (or philosophers, given the implications of Novikov’s principle on free will) agree; some think that actions during time travel may create new timelines (as seen in Back to the Future II; for more on theories of alternate universes, check out the World Science Festival program “Multiverse: One Universe or Many?”). Whichever theory of timelines you subscribe to, it’s probably best to play it safe and not kill anyone.